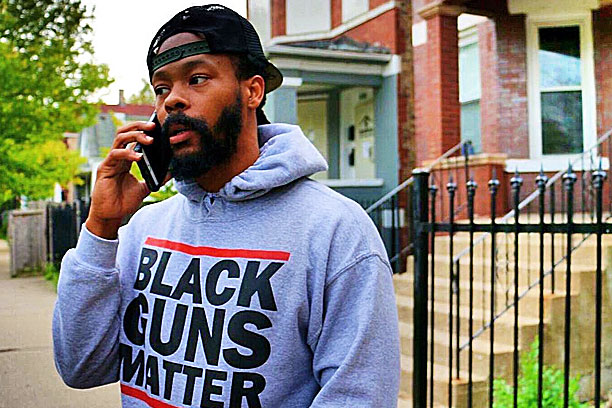 On the podcast this week, I have Maj Toure joining us. He’s from Philadelphia and is currently on a tour around the country promoting his Black Guns Matter movement. If you haven’t heard about it yet, he’ll go into all the details in this episode. But the basic idea is to educate as many people about gun safety as well as offer firearm training to anyone that wants to learn.

The organization has been going on for about a year now, but it’s been gaining a lot of traction over the past few months. He’s been featured on several other podcasts, blogs, as well as some of the biggest news stations out there. So I was honored for him to take time out of his busy day to share his story with the Risk Without Regret audience.

Just like I tell all guests that come on the show, “Be yourself, say whatever you want, curse if you need to, but above all, share stories that will inspire and motivate anyone that hears this.” This episode is exactly that. Maj is raw and really gets to the point of how to reach your goals. It’s easier than you think, but it’s not for the lazy.

Anyways, I’m excited to share this one with you, and if you find value in this episode, definitely check out his GoFundMe page (linked below) to support Maj and the Black Guns Matter movement. Now that I’ve given you a brief overview, it’s time to get to the good part. So sit back, relax, and listen to our conversation. Enjoy!

I hope you loved this episode, and if you did, be sure to subscribe to the podcast here!

Online Shop Master Course – Teaching you how to build your own e-commerce website so you can start selling your products online!

Best quotes from this episode

I was just a regular dude that had bad information.

The information is there, but people need a little bit of guidance.

As far as punching the clock somewhere I don’t wanna be, I’m way too strong for that, that’s just not for me.

We present a different option, a more productive option.

I respect their right to disagree, that’s the beauty of democracy.

I don’t complain and I don’t explain.

There’s no such thing as haters, they’re just misguided lovers.

I have a passion for firearms and I’m not a criminal.

I’m on the ground looking. I’m here with the people. I’m not up in the ivory tower.

MEDIA: Most Effective Destroyer In America

People don’t want to get outside. They’ve been conditioned to stay in and just let things happen.

Pick the first thing that you want to do and just start doing it. Fuck up along the way.

Apologize for your mistakes. Then you move forward. Just do the work.

Everybody sees how I’m moving out here. I’m like everywhere. And that’s not because I’m this great super person, you just do the work.

The opportunity will never be perfect. Use what you have, where you are, and do what you can.

Stop thinking you’re a celebrity. You’re just a human with a lot more zeros in your bank account.

When you’re in the public, you’re a servant.

This shit is gonna take over your life, or you’re not doing it right.

The small individual moments are priceless and motivational.

Sleep is the cousin of death.

People respect my movement because of how I moved before the movement.

What I do on my social media is, I make little motivational videos. The general public thinks that’s for them. It’s not. I use it for me at times when I’m down to keep myself motivated. It’s like my future self talking to my present self.

Stop talking so much, just do shit.

Motivate yourself by using yourself, because you know your dreams better than anybody.

Everybody thinks they’re bigger than the couch, but the couch is undefeated.

Be sure to subscribe to the podcast here and I can’t wait to share the next episode with you soon! And feel free to leave a comment below with your feedback and any questions you have.